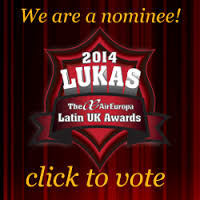 Can KANKUN’s Cardenas make a killing at KOKO in Camden?

Rolando Cardenas, aka the KANKUN® Luchador and business director of KANKUN® Sauce, has been nominated for Business Personality of the Year at the LUKAS Awards 2014.

The LUKAS Awards, now in their 3rd year, are the only awards to recognise the contribution of Britain’s one million Latin American, Spanish and Portuguese residents.

The KANKUN® Luchador has played a major part in the growth of Mexican food’s popularity across the UK. Mexican food products such as tortilla kits, currently outsell the traditional UK favourite, curry, by almost £68 million. Cardenas has also made his mark with industry influentials and celebrities. Spontaneously appearing at high profile events, he has been ‘papped’ with Jonathan Ross, Mischa Barton and Richard Bacon. He also turned up at last year’s London Marathon to cheer on participants.

Talking about the award nomination, Cardenas said: “We can’t wait for the LUKAS Awards this year. It’s going to be a massive celebration and the KANKUN® Luchador will take centre stage! We had a great time at the LUKAS Awards in 2013 and intend to do the same this year. Amaranta Wright and Jose Luis, the founders of LUKAS Awards, should take great credit for the magnificent work they have put into organising this event and for being ambassadors of the Latin culture in the UK.”

Travelling the country to showcase and promote Latin American Food, the dedicated KANKUN® Luchador has appeared at the Edinburgh Festival. He was one of few entrepreneurs invited to meet the Mayor of London, Boris Johnson, at City Hall in the capital in March 2013.

KANKUN® offers four authentic Mexican sauces. Free of gluten and additives, all are suitable for vegetarians. The range comprises Habanero, Chipotle hot and mild and a marinade. KANKUN® Sauce uses a secret recipe guarded fervently by generations of grandmas, aunties, and mamas from the Cardenas family. As such, the products represent the closest possible replication of the traditional homemade sauces enjoyed at Mexican family gatherings.

Cardenas, the artist behind the sauce, learned the art of the perfect chilli mix by sneaking into the kitchen at family dinners and watching, tasting and smelling the age-old recipes at the heart of his family’s tradition. He soaked up the tricks and secrets of the sauces, then replicated them a thousand times until they were as good as those from his childhood.

The LUKAS Awards 2014 gala ceremony will be held at KOKO in Camden Town, LondonNW1 7JE on Wednesday 30 April 2014, and will be broadcast in Latin America.

For more information on the KANKUN® products, stockists and recipe ideas, visit www.kankunsauce.com.